The King of Rock n’ Roll takes the Fallsview Theatre stage at the Scotiabank Convention Centre, from February 14, 2017 to February 19, 2017. Ticket sales from this event will help support the important work of Bethlehem Housing and Support Services.

Where: Fallsview Theatre at the Scotiabank Convention Centre

Blue Suede Shoes: The King, The Colonel, The Memories, the jukebox musical opening the Scotiabank Convention Centre’s Theatre stage 2017 season, has all the right Elvis moves.

The sexy mumbles, dozens of hits and London-born Roy LeBlanc, who loves and lives the Presley songbook. Roy has been Vegas world champion and hosted the Collingwood “Elvisfest” for several years. His authenticity, stage presence and unmatched skill behind the mic has allowed him to travel the world as one of the most heralded Elvis tribute performers!

Told through the eyes of Elvis’ business manager, Colonel Tom Parker, the show shakes, rattles and rolls through Elvis’ humble beginnings at Sun Records to the Hollywood years and on to the near-mythical comeback and flamboyant Las Vegas residency.

With over 40 songs and dozens of costume changes, the Blue Suede Shoes event details the days when Elvis was the King of both stage and screen. 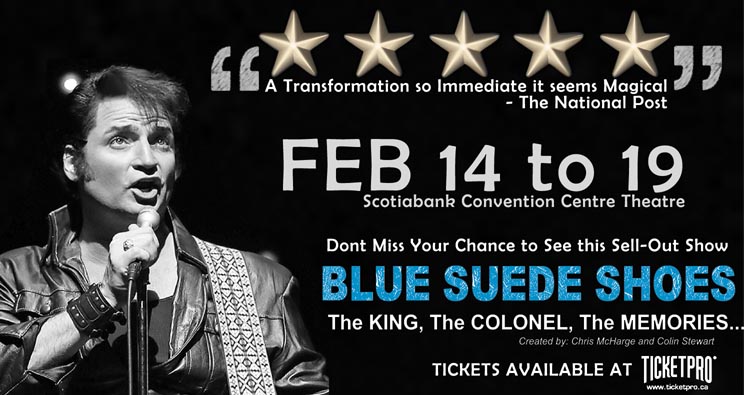