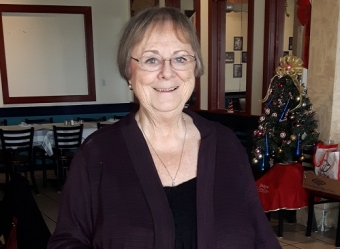 Joan first began working at Bethlehem Housing and Support Services, then known as Bethlehem Projects, in January of 1988.

Joan was working at Brock University when a friend mentioned to her that a group of local churches were hiring staff for a new affordable housing project. A Christian Service group called Outreach Niagara recognized the need to provide affordable housing for people at risk of homelessness in St. Catharines.

What first attracted Joan to work for Bethlehem Projects was the concept of helping people secure safe and affordable housing. Bethlehem Projects started small, with only five employees who shared two desks in a small office. Years later, Joan received an office that she shared with her colleague, Laura Arbour. “I have been working with Laura since May of 1988, almost 29 years.”

When she first began they were starting from scratch, without any support programs. They started by incorporating life-skills programming into Bethlehem Place. A few years later they created support groups, including a healthy relationships and co-dependency group, which Joan has continued leading for over 20 years.

Over the years, Joan’s title has transformed from Support Counsellor to Support Staff and finally to Community Support Worker, however, what remains the same is Joan’s commitment to the organization. For the last 29 years she has been working directly with clients and residents of Bethlehem Housing and Support Services.

For Joan, the most fulfilling part about the job is seeing her clients make changes for the better and sticking with it. “I have never had a client I didn’t like. I may not have liked their behaviour, but I always liked them.” This motto was especially important for Joan because she found it important to separate people from behaviour.

Some of Joan’s best memories of working for Bethlehem Housing and Support Services are the Children’s Christmas parties.

Joan has had a powerful impact on the organization for the last 29 years. We know that if she puts in as much effort into enjoying her retirement as she has working for Bethlehem Housing, her retirement will be truly amazing!

Congratulations Joan! We wish you all the best.