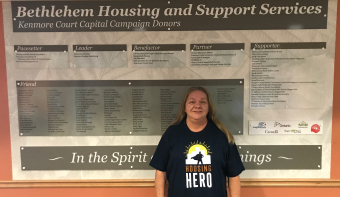 Diane has been living at Kenmore Court in Niagara Falls for more than eight years. She is one of the first residents to move into the building and has been a long-standing volunteer security resident.

Diane first heard of Bethlehem Housing after she drove by the construction of Kenmore Court back in 2009. She called the organization and was put in contact with Leigh, a former Community Support Worker at Bethlehem Place and Gail, the former Property Manager.

After Diane explained she needed a place to live as she was in an abusive relationship at the time, Leigh moved the process along and helped her to secure an apartment at Kenmore Court.

During her first year living at Kenmore, Diane would shadow the superintendents of the building at the time. She explained, “I was always curious about how the building operated and liked to help them out where I could.”

Once the superintendents had moved out, Kathy, our current Property Manager, approached Diane because of her dedicated personality and asked her if she wanted to become the security resident for Kenmore. Diane said, “I said yes because I enjoy keeping the building safe and clean.”

Her role as the security resident starts Friday morning and goes through to Monday morning. “My main role is to make sure people don’t come into the building that aren’t supposed to, clean up the hallways, community room and lobby by sweeping and mopping, empty the garbage’s, and just make sure things are in order.”

Diane loves her responsibility as the security resident of Kenmore Court. It keeps her busy, fills her free time and gives her the opportunity to interact with other residents of the building. When asked what she enjoys most about her role, she said, “I especially like helping the other residents and keeping the building safe.”

This opportunity has really allowed her to come out of her shell and socialize with her neighbors. Now, one of her favourite aspects of living at Kenmore is her friendships with other tenants.

When Diane is not on security duty she is usually watching her grandkids. She currently babysits her 9-year-old, 6-year-old, 3-year-old and 1-year-old grandchildren. When talking about her grandkids, Diane’s face lights up with joy, “They are what keep me going.”

Diane says that as long as she is living at Kenmore Court, she will continue to be the buildings security resident.

Thank you, Diane, for keeping our building safe, secure and clean! 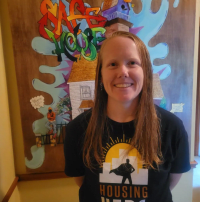