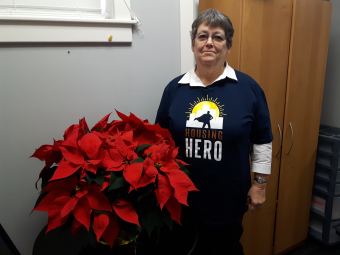 Dawn Gordon has been volunteering with Bethlehem Housing and Support Services for over 10 years.

One of Bethlehem’s past chair’s and Dawn’s friend, Val Kerr, introduced her to the organization and got her involved with volunteering on our development committee in 2006.

Although Dawn initially became involved with Bethlehem because of her friend, she stayed because she felt as though the work that was being done in the community was so worthwhile. She says, “Bethlehem isn't focused on one sector in particular. It is very inclusive and far reaching, which is extremely rewarding as a volunteer.”

Throughout the last 11 years of volunteering with Bethlehem, Dawn agrees that what she enjoys most was feeling useful. “While volunteering on the different committees I had the opportunity to use different skills, such as organizational and interpersonal, that I might not have used on a daily basis in my career.”

Dawn was a nurse for 35 years. For more than half of her nursing career she practised in the Neonatal Intensive Care and Neonatal Research Centre, which were her favourite departments at the Women's and Children Hospital in Buffalo.

After retiring in 2004, Dawn has been keeping busy by travelling the world. Her favourite places she has visited are Scotland, Alaska and Hawaii. She recently did a solo trip to Europe in June of 2017 for 13 days, where she visited 8 different countries. She eventually wants to make it out to Australia, New Zealand and Tasmania.

When asked why Dawn cares about the housing issue in Niagara, she says “I truly believe families should never be without a home.”

Thank you, Dawn, for being a part of the affordable housing solution by contributing your time and treasure to Bethlehem!