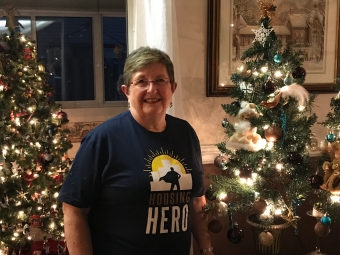 Sue Anderson decided to become a monthly donor because she believes deeply in Bethlehem's mission. Sue and her late husband John have been loyal supporters of Bethlehem since 1990.

John and Sue Anderson were active members of Elm Street United Church, one of the churches involved in forming Bethlehem Place.  In 1990, after completing his time on the Public School Board, John joined Bethlehem’s board.

“He was a good man and he wanted to help families in need in our community” says Sue.

Sue fondly remembers the many fundraising events that she attended with John over the years. As a couple they shared values of giving back to the community and bringing love into the lives of those in need.

Over the years they have supported several local charities including The RAFT, Women’s Place, Community Care, and Bethlehem Housing.

“It upsets me to think of someone not having a warm safe place to sleep”, says Sue. “My parents came from England to Canada to make a better life for us.  It was tough and we had to scrimp and save, but we always had a roof over our head, food on our table, and lots of love.”

Love is most important to Sue and she makes every effort to bring love into people’s life through her daily actions.

“When my husband passed away in 2006, I decided to honour his memory by supporting Bethlehem with a monthly donation.”

In 2016, when Bethlehem launched the Housing Hero initiative, Sue was one of the first donors to respond by increasing her monthly donations to help provide a family with support services for their year in transitional housing.

Since 1986, because of loyal supporters like Sue and John Anderson, Bethlehem has helped more than 2,000 families stabilize their lives.