Micheal's Story: My Ever Shrinking World

Micheal's Story: My Ever Shrinking World 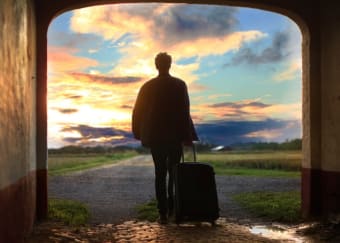 On June 1, 2020 we opened the doors to our very first tenant who has courageously shared his story. Michael has been living in his new apartment for a few months and we have already witnessed a significant increase in his confidence and independence. His story is just one example of many on the positive impact that affordable housing has on the Niagara community.

A few weeks ago, I packed up all my belongings and moved from the apartment where I resided for almost 4 years. It was my safe place in the world, a place that sheltered me through many of life’s storms and became the center of my ever shrinking world.

On June 1, 2020 I took the bold step forward to move my belongings to a new place to create a new home at North Church Court. I was the very first resident to move into the building. When I opened the doors to my new apartment I felt a sense of peace and hope that this place would begin to open up the world for me again.

In my late teens and early twenties my world was big. I served in the military and traveled to many places around the world. Then in my late twenties, after experiencing a few personal traumas, I began to manifest debilitating anxiety disorders including obsessive compulsive disorder and agoraphobia. I no longer felt safe and my world began to shrink.

Stepping outside of my home to do any activity became more and more difficult. I would instantly go from feeling calm to feeling panic. My palms would start sweating, my heart would start pounding, my stomach would turn, my lungs would constrict and each breath became harder and harder to catch. My body became my worst enemy and I could not control it. The only thing I could control was my escape. So I would retreat back into my home and find refuge in the place that kept my world small and safe.

I sought medical care and was prescribed a medication to help manage my anxiety disorders. It was around this time, about 15 years ago, that I found housing with Bethlehem Housing at Genesis Court.  It was a perfect situation for me and provided me with opportunities to meet new people and to begin expanding my world. I have always been a handy man and was able to use my skills through a part-time job doing maintenance and repairs at Bethlehem Place. It was an experience that I really enjoyed!  But then I developed diabetes and my eyesight began to fail me, I began to lose my coordination and I couldn’t do the job anymore.

Having to rely on disability income, it became difficult for me to continue to afford my rent and have enough money to live on. I was offered a housing subsidy that would provide me with more money for my basic living needs. In order to access the subsidy I was required to move from Genesis Court to a bachelor apartment inside a house with a few other apartments. It was during this time that the anxiety medication I was taking, for almost 20 years, was no longer working for me. I had to go off my medication completely before I could switch over to a new medication. This sent me on a downward spiral for almost 8 months and my world began to shrink again.

With the support of Rob, Bethlehem’s Community Support Worker, and the new medication I began to start expanding my world again. Rob took the time to get to know me, he listened to me, understood my fears and supported me to achieve my goals one step at a time. We have a very trusting relationship. He is gentle with me and he pushes me but never to the point of panic. Over the past few years, Rob has supported me on my daily walks and when he senses that I am starting to get taken over by anxiety we stop and breathe deeply, get grounded and then he encourages me to take one more step.

My current goal is focusing on extending my walking distances in opposite ways. It might not seem like much to you, but for me it is a big deal. I try at least once or twice a day to get out for a walk on my own. I practice the skills that Rob taught me and try hard to walk a few steps further. Some days are better than others.

Bethlehem has been a big part of my life and I am grateful for the housing and supports that have been provided to me over the years. I really like my new apartment and I am happy to be surrounded by people that I can become friends with.  It has been less than one month since I have lived at North Church Court and my world has already begun to expand.

Our supporters have cared for our families and helped us to build safe affordable housing to get us to where we are today. Your support is essential to us being able to serve and support an even greater number of families and individuals like Michael.

Join us at our Housing Hero Summer Party Open House!